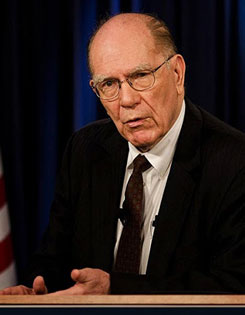 2. A new national bank or other credit-issuing mechanism, such as Lincoln’s Greenbacks, capable of producing massive amounts of credit for long-term economic projects;

3. Use of this national banking mechanism to selectively fund projects that will raise national physical productivity and create high-paying jobs in productive sectors of the economy; and

4. A crash program to develop fusion power—not only providing power for the entire planet, but to end raw materials shortages and to support mankind's exploration and development of the Solar System.

When most people think about economic policy, they think of money and markets. When Lyndon LaRouche developed his economic discovery, he studied the relation between human creative discovery and increasing productivity.

Based on this superior approach, in 2013 Mr. LaRouche outlined a policy memorandum for the United States, his "Four Laws to Save the U.S.A." Although this was drafted a number of years ago, the financial elite of the City of London and Wall Street have maintained their insane polices, and Mr. LaRouche's program is even more urgent today.

Once again, we are about to experience the failure of a system which uses the accumulation of money as the measure for economic activity, and LaRouche's Four Laws remain "an immediate necessity." Watch our 20 minute summary of LaRouche's program.

While the current meltdown of the world monetary system makes the adoption of Glass-Stegall and a credit system an urgent priority, such changes will fall short unless they are guided by an image of man which is radically different from the image of man which underlies monetarism.

In his Fourth Law, LaRouche states,

"The knowable measure, in principle, of the difference between man and all among the lower forms of life, is found in what has been usefully regarded as the naturally upward evolution of the human species, in contrast to all other known categories of living species. The standard of measurement of these compared relationships, is that mankind is enabled to evolve upward, and that categorically, by those voluntarily noëtic powers of the human individual will."

In the following video, LaRouche puts that concept into action in his discussion of the impact that a Moon-Mars mission will have on our economy, and on our very identities.

Think about the image of man presented in that short segment. Now, contrast that to the image of man put forward by Adam Smith, the father of free trade and monetarism. In his 1790 "Theory of Moral Sentiments," Smith asserts that man is only a creature of his physical senses and his passions, and cannot know the consequences of his actions, and therefore cannot act for the future. All that man can do is "avoid pain and pursue pleasure." That is the basis of a "monetary" system.

LaRouche discusses the contrasting image of man that shapes a credit system:

LaRouche's 2013 Statement: Four New Laws to Save the USA, Now!

Further reading about each of LaRouche's Four Laws:


4. A National Crash Program for Fusion and Space Exploration