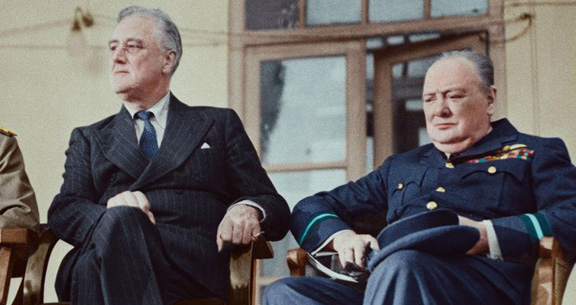 As an Allied victory neared in World War II, Franklin Roosevelt envisioned a post-war world in which all empires (not only the attempted Nazi and Japanese empires) would be abolished, and in which international financial institutions, with a mandate and mission to develop the world, would play a prominent role in relations among nations. Winston Churchill and John Maynard Keynes had a very different idea—they weren’t, after all, about to give up their centuries-old British Empire. This conflict between two supposed allies, set the stage for an incredible brawl, not just for which economic system would rebuild the post-war world, but which idea of man—the bestial British outlook, or the revolutionary republican view of man—would govern the next century of policy-making on the planet.

This is what was at the center of the fight during the Bretton Woods conference of 1944-1945.

“Mr. President,” he [Churchill] cried, “I believe you are trying to do away with the British Empire. Every idea you entertain about the structure of the postwar world demonstrates it. But in spite of that, we know that you constitute our only hope. And”—his voice sand dramatically—“you know that we know it. You know that we know that without America, the Empire won't stand.”

Or would have been if Father [FDR] had lived.  —Elliot Roosevelt’s As He Saw It

(You can read more about Roosevelt’s view of Bretton Woods here.)

Today, an alliance among the United States, Russia, China, and India is absolutely essential for creating a new system. Either excluding these nations or attempting to create purely regional solutions will not function, as LaRouche details in his 2008 paper “New Bretton Woods: Russia’s Role in a Recovery.”

Here, Will Wertz, long-time collaborator of Lyndon LaRouche, describes this showdown as it occurred during the Bretton Woods conference, and how it has played out since. After all, Franklin Roosevelt died before the end of the war, and the British wasted no time in turning the Bretton Woods institutions, intended to promote the full development of nation states, particularly in the developing sector, into the financial overlords of globalism and deliberate underdevelopment. (A transcript of Wertz's remarks can be found here.)

Here is LaRouche again on the British:

More from Lyndon LaRouche on the American vs. British Outlook

· LaRouche Webcast Excerpt: The Death of the Post-FDR System

Any questions? Leave them in the comments section below.

Come to better understand the difference between money and national credit, and how LaRouche’s unique insights into economics clear up the dreck that presents itself as economic thought today. >>>