The  letter was posted after 11 days after much editing.They left out parts that attacked the whole "Regime Change" policy of Bush and Obama, my attack on the "White Helmets" operation, and the 'BRICS" development policy.

Where's the outrage over Saudi atrocities in Yemen?

Picture:
A view of the destruction after the bombing of a funeral hall in Sana by the Saudi-led coalition carrying out airstrikes over Yemen. (Mohammed Huwais / AFP/Getty Images)
Saudi Arabia has committed war crimes in Yemen with U.S. help.

Why is there no concern about the bombings of civilians at weddings and funerals and of hospitals and schools by Saudi warplanes in Yemen using U.S. weapons and mid-air refueling?

Despite the State Department propaganda laundered through the U.S. media, Russia is assisting the Syrian government to defend the Syrian population against all terrorist jihadists.

Many U.S. military leaders have said there are no "moderate rebels" who are not working with or who aren't themselves jihadist terrorists.

Al Nusra films its child beheadings, shoots civilians who attempt to flee its rule and launches missile attacks against civilians in government-controlled areas of Aleppo.

Why is your editorial supporting giving weapons, training and supplies to "moderate terrorists " in Syria? Why no outcry about U.S. bombing of civilians, hospitals, schools in the Syrian city of Manbij?

The U.S. should end its alliance with the barbaric Saudis and hold them accountable for their role in supporting al-Qaida's Sept. 11 terrorist attacks on the U.S. 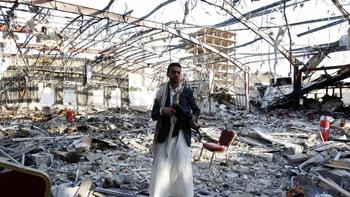