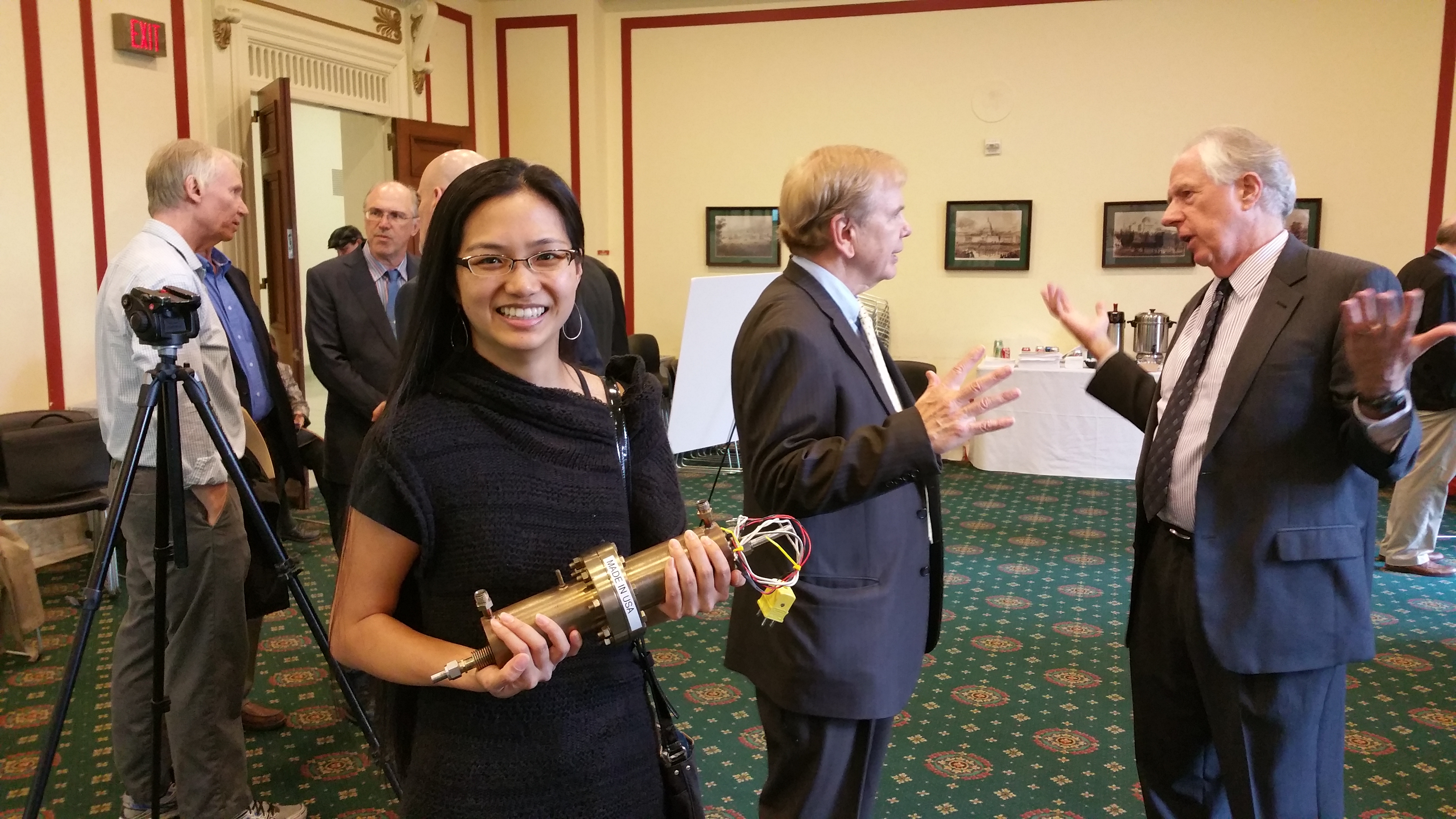 That's me holding the LENR reactor core. Wonder how they got this one through security.  Behind me is Brillouin Energy CEO Robert Georges.

Monday Nov 2 Brillouin Energy presented in work in the Rayburn Congressional building.  The company has decided to go ahead with a track to commercialize a reactor that uses low energy nuclear reactions to produce heat and electricity.  Low energy nuclear reactions (LENR), sometimes known (inaccurately) as  “cold fusion”, has been a subject of heated debate, rivaling manmade climate change. Despite years of data showing that nuclear reactions can occur at relatively low energy, as the CEO’s of Brillouin Energy illustrated with several personal accounts, the existence of the phenomenon is still controversial.  So controversial, that national labs have denied contracts to perform even very isolated tests such as materials or pressure testing.

Head engineer of Brillouin Energy, Robert Godes, pointed out several occasions where people looked squarely at the experimental results, including confirmation from an outside unbiased source, and flatly denied the data’s existence.  Why such irrational behavior?

In the scientific community there is an orthodox requirement imposed on publishing new results.   You must have a mechanism by which the phenomenon can be explained.  In other words you must be able to explain your possibly revolutionary data with already known science.  Unfortunately and also fortunately, so far low energy nuclear reactions have defied all conventional explanations.

One of the main frustrations is that, from experience, reactions that involve a change in the nucleus (as opposed to changes in the arrangement of atoms in chemical reactions) involve radioactive products, such as neutrons, alpha particles (helium nuclei), beta particles (very fast electrons) and gamma rays (very short wavelength light).  These products, which shoot out in all directions, also make the reactions and products easy to detect.  Low energy nuclear reactions have shown none of these products during reaction.

What has been consistently shown, in the many variations of experiments, is 1) heat, above what is possible in chemical reactions between the constituents involved, is detected, and 2) elements (such as tritium) which were not there to begin with, are detected after reaction.

Brillouin Energy has not been able to fully characterize their products yet, due to the repeated encounters with paranoid and doubtful national lab employees, however they have have been able to perform repeated experiments resulting in 4x the input.  An independent source also confirmed trace tritium, an isotope of hydrogen that was not there before the reaction.

Brillouin has their own hypothesis for what is going on, which is briefly animated here, but instead of waiting for the full explanation of theory to go through consensus, they have taken the fact that they see that energy is being produced and decided to put their reactor on the market.  If the science is explained by then, great.  If not, it still works.  The first humans to use fire did not know chemistry, but that did not stop them from cooking their food.