(1) The immediate re-enactment of the Glass-Steagall law instituted by U.S. President Franklin D. Roosevelt, without modification, as to principle of action.

President Franklin D. Roosevelt’s Glass-Steagall Act was in force from 1933 to the mid-1990s, and was repealed in 1999 after being deliberately unenforced by regulators for several years. It must be restored now: as a matter of justice for the terrific damages wreaked on American households and businesses by the 2008 financial crash; in order to prevent another, oncoming banking crash; and in order to restore the U.S. commercial banking system as an engine of bank credit through lending, which will contribute to a national recovery of industry, productivity and productive employment. 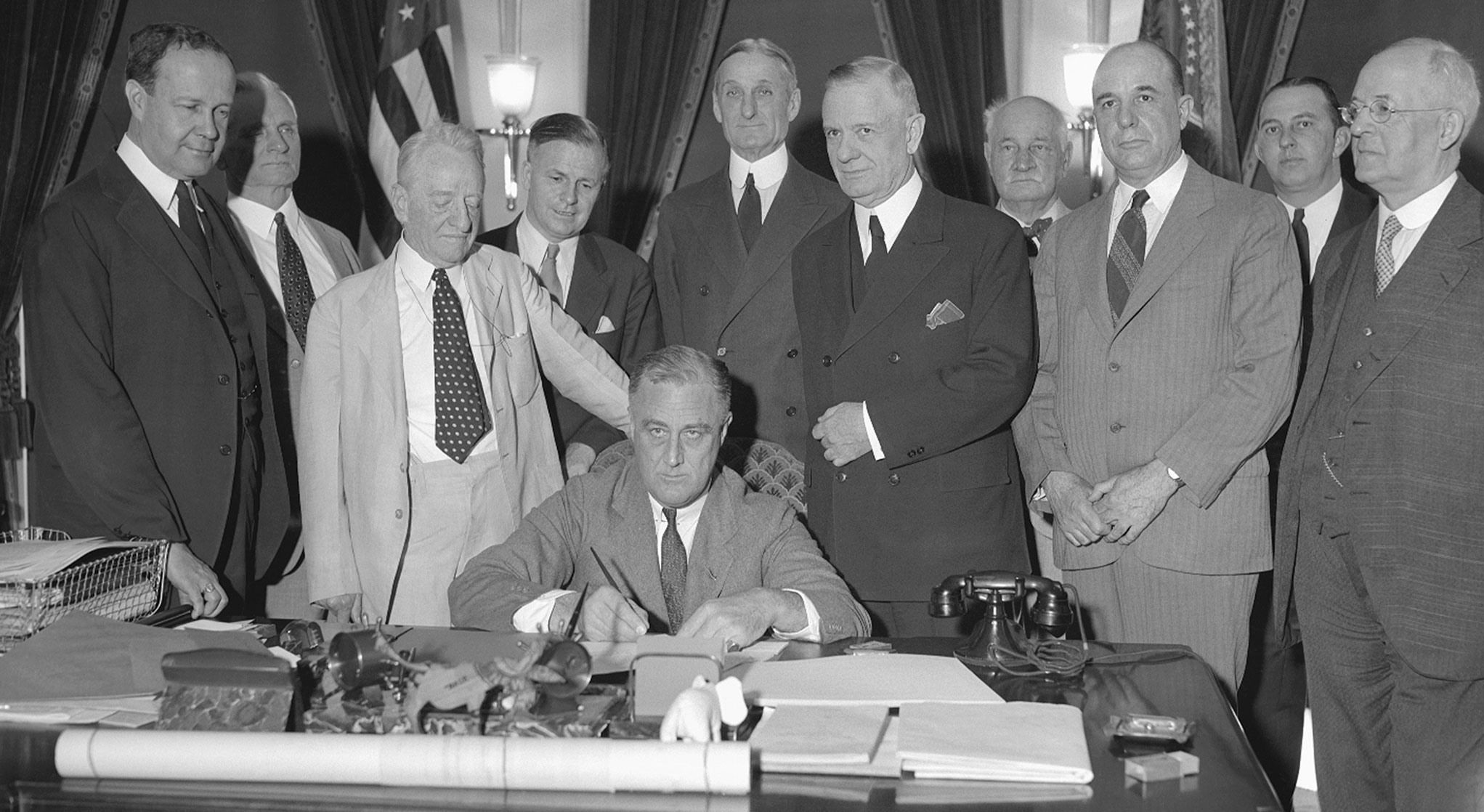 The Casino Is Looting the Economy

The American people need a banking system which lends into the economy and participates along with national credit institutions in national rebuilding of infrastructure, industry and science: in Alexander Hamilton’s words, “concentrating the savings of the citizens and placing them in the hands of those who can use them most productively.” The Glass-Steagall Act protected bank depositors and the government itself from the speculative activities of Wall Street megabanks. Under Glass-Steagall separation of commercial and investment banking, securities firms and investment banks could not take deposits, and commercial Federal Reserve member banks could not:

The Roosevelt Administration passed Glass-Steagall in 1933 precisely because the mix of speculative and commercial banking activities resulted in the Great Depression, as failures spread like a contagion through the system. Glass-Steagall stopped this for over 60 years, during which time no major financial failure threatened to bring down other banks, or the whole banking system. Just a decade after Glass-Steagall was done away with in 1999, the collapse of Lehman Brothers in 2008 spread through the whole financial system like a weapon of mass destruction.

Now, 10 years following the bank panic and financial crash of late 2008, and the decimation of the nation’s citizens, farms, and factories to bail out the banks, the American banking system has only barely increased its lending to households and businesses. Despite receiving a very large increase in deposits, and having some $14 trillion in liquidity from taxpayer institutions poured in by bailouts — more than $4 trillion of it permanently — lending to the real economy is minimal. Deposits have risen from $7.5 trillion in 2008 to $11 trillion in 2015, while the Federal Reserve put $4.5 trillion into the biggest banks by buying their securities; but loans and leases from the banks rose only from $7.3 trillion in 2008 to $8.3 trillion at the end of 2015, according to Federal Reserve data.

For the “Big 12” megabanks, instead of lending, “trading” has been their watchword for profits, including with the bailout liquidity they received from taxpayers. “Trading” means the stock and bond markets, junk bonds and commodities trading, foreign exchange trading, “securitizing” everything from subprime mortgages to auto loans to home rents, repo markets, and of course creating “financial derivatives” bets on all of it. The Wells Fargo account-fraud scandal showed that right down to the retail level where branch bankers talk to customers, all the biggest banks are driving to put customers’ deposits directly into “financial products” including derivatives, rather than turning those deposits into loans to the U.S. economy. This speculative activity sucks the life out of the real economy.

Some 28% of all U.S. bank assets reported by the Federal Reserve now are securities. The average for the “Big 12” banks is about 35% securities, and that definitely does not include their financial derivatives “assets.” Combine that with the looming crash of the U.S. corporate debt bubble and you have the prescription for a financial inferno.

If Glass-Steagall is not immediately re-enacted, preemptively, now, a crash will happen with even greater devastation of Americans’ livelihoods than that of September 2008.

How Dangerous Are the Too-Big-To-Fail Banks?

Until Glass-Steagall was abandoned in the mid-1990s, there also were no “megabanks” based in the United States; no bank held more than 6% of total assets in the banking system as a whole. Starting in the late 1990s the largest Wall Street banks exploded in size, and this has continued since the 2008 crash, so that now just six banks hold two-thirds of the deposits and two-thirds of the assets in the entire banking system.

Once Glass-Steagall was repealed, the derivatives markets exploded in size, from nominal values totaling about $70 trillion in 1998, to more than $700 trillion a decade later. In 2008, the size of this derivatives market threatened to bring down all of the biggest banks at once, had the government not bailed most of them out. And after the crash, the six biggest Wall Street banks accumulated, on average, 30% more derivatives exposure, according to FDIC vice chairman Thomas Hoenig in 2014. That derivatives exposure was $232 trillion then; it is $265 trillion now. This is about 12 times the nominal value of the entire U.S. economy. Even the entire economic output of the U.S. would not be enough to pay up on these bets. 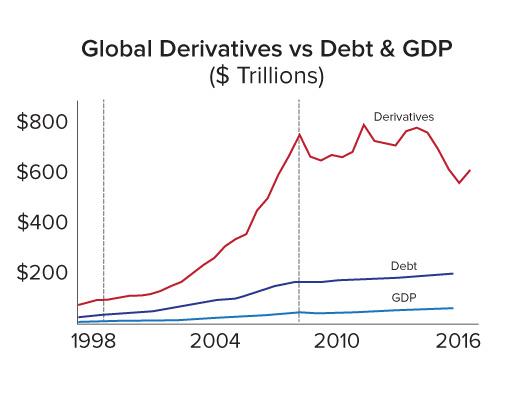 Since 2008, the indebtedness of the systemically important financial institutions has only grown, while the measures taken to address the collapse have made the system even more bankrupt, creating a situation where the rest of the economy collapses at an increasing rate to keep up. The $14 trillion “eased” into the system to keep the “globally systemic” banks afloat went to purchase toxic assets of the financial institutions and create stock market and other financial bubbles. Much of the money loaned went straight into these bubbles. Much of the $4.5 trillion created by the Fed to buy banks’ securities, was put back into the Federal Reserve by those very banks as interest-earning “excess bank reserves,” never entering the real economy.

And now, corporate debt levels, along with derivatives world-wide, edge toward another implosion. The debt of U.S. non-financial corporations has more than doubled, reaching over $14 trillion: $11 trillion owed to banks and the rest to “shadow banks” such as money market mutual funds, pension funds, and similar funds. Figure 1 shows the extraordinary rate at which the banks’ portion of that debt bubble grew, both leading into the 2008 crash and after it, up through mid- 2015.

Feeding the explosion of corporate debt has been the vast money-printing of the central banks of the United States, the UK, Japan, and the Eurozone: their $15 trillion in lending facilities to big banks, with effective zero interest rates, has been combined with roughly $14 trillion in capital and liquidity infusions by buying bonds from the big private banks.

Since 2013, some 80% or more of this borrowing has been used by larger corporations for “financial engineering”; that is, buying their own stock to drive it up, or buying other companies’ stock in mergers and acquisitions which have the same effect. Some $4 trillion has gone into driving up stock market indices while betting on them; another $4 trillion has gone into dividends to stockholders. But total nonfinancial corporations’ profits have not increased since 2011; and in the three years 2013-5, they fell.

Therefore, debt leverage has jumped up. Morgan Stanley bank itself published a detailed research note on April 20, 2017 which reported that the ratio of non-financial corporate debt to cash-from-operations is at an all-time high of 3.2:1 (2.7:1 is the highest it has ever been before, the bank reported). Companies have low and falling “interest coverage,” or ability to even pay interest from earnings—coverage levels like those in the 2001 recession and the 2008 crash.

The IMF 2017 Global Financial Stability Report found that in the United States, the ratio of debt service to income for non-financial corporations had risen quickly from 37% in 2014, to 41% in 2016. With debt flying up relative to operating cash, and with profits declining, companies can keep servicing debt only by borrowing more. Those corporations have $7 trillion more debt than they had at the 2008 crash, but $3 trillion less equity invested in them.

In that report, the IMF made the startling forecast that any sudden interest rate rise in the United States economy would result in at least 20% of American non-financial corporations being brought to default—a default rate higher than any reached in the mortgage sector prior to the 2008 bank panic.

Handelsblatt on May 8, 2017 and the London Financial Times on May 30 published articles by bank researchers noting that a 2008-like debt crash could be near, triggered by an unrepayable U.S. corporate bubble. Handelsblatt blamed the Federal Reserve's and European Central Bank's zero-interest and qualitative easing for creating this situation, in which “The United States could once again become the trigger and possibly the epicenter of the next crisis.”

Total debt securities in the U.S. economy are now at 220% of GDP, whereas in 2007 at the height of the last (mortgage-centered) bubble, they reached 180% of GDP. 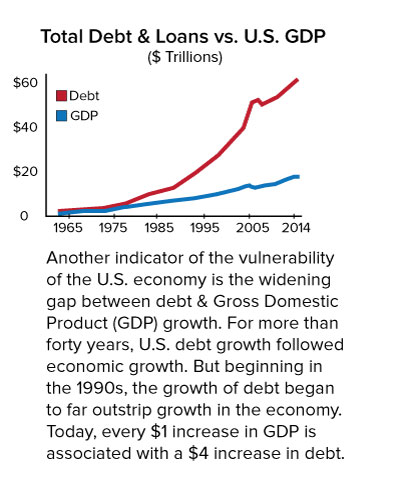 As the corporate debt bubble in the United States reached its peak and threatened to begin the collapse, its composition shifted strongly in 2017 toward “junk debt”—that is, junk bonds and leveraged loans, or loans to already over-indebted companies essentially allowing them to pay interest—with this junk or subprime component of corporate debt growing by $800 billion in 2017 alone. A further shift was away from commercial and industrial lending to real estate debt. At the same time, consumer debt suddenly started growing rapidly after generally shrinking since the 2008 crash. Subprime auto debt, for example, has higher default rates in 2017 than subprime mortgage debt did in 2007.

But the rates at which these categories of the debt bubble were growing, were not as fast as the rates at which they were being securitized by the major banks, and the new debt securities sold to mutual funds, pension funds, individual investors, and so on. Here too, the biggest banks were trying to get out and dump the debt on other investors. They did the same thing with mortgage securities and derivatives during 2007 and 2008. The return of these practices is a sure sign that the huge debt bubble is nearing a crash.

The only means to stop this world-wide dumping of financial toxic waste — the hallmark of the 2007-08 crash — to create the space for an orderly bankruptcy reorganization of these worthless debts, and to create a lending-oriented commercial banking system, is to re-enact Glass-Steagall now.