LaRouche's Four Laws and an end to Obama/Saudi Genocide

Last weekend in Dearborn, MI the Yemeni American community held two events in response to the horrific attack on a well-attended funeral for a Houthi military leader. Friday night, they held a memorial honoring the hundreds of innocent Yemeni civilians that had been murdered by Saudi Arabia in that attack. Saturday they organized a demonstration against the ruthless Saudi war. A few of our activists in the area have spoken many times with leaders in the Arabic community about the necessity of removing Obama from office, ending the perpetual war policy, and orienting the US towards the new paradigm of global economic development. There has been little disagreement with our program, and even less when it comes to ending the wars, but they have managed to maintain a strange, apologetic stance on Obama. 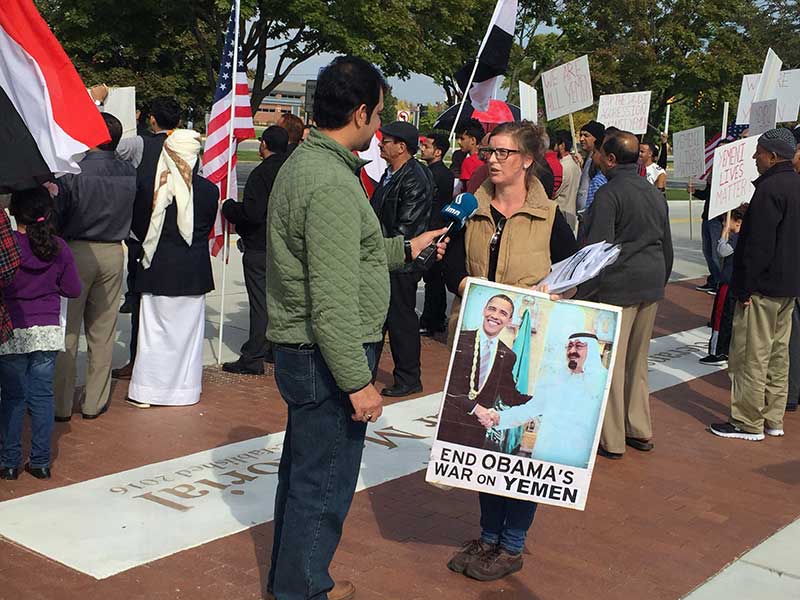 One of our activists attended the memorial on Friday evening and was extremely well received, being the only non-Arab in the room. Though most of the event was in Arabic, a statement in English was handed out at the beginning of the event, calling on Obama, Congress, the UNSC and the UN Secretary General to take actions against the war crimes committed by Saudi Arabia and its coalition. On two occasions, the speakers spoke in English for the stated purpose of delivering a message to Washington DC, and the apologetic tone was now nowhere to be found. After the event, our activist was acknowledged from the podium as working with LaRouche and several people came up to her afterward. She spoke to them about the fact that Saudi Arabia could do NOTHING without the US/UK and that it is the whole triumvirate of evil which must be shut down and replaced with the perspective around the New Silk Road. She made several contacts who we then saw the next day at the rally.

Three of our activists attended the demonstration against the Saudi war on Yemen intending to put Obama’s role front and center. We went with signs that prominently displayed Obama and King Abdullah together, and read: “Stop Obama’s War on Yemen”. Upon arrival, one of the organizers we had met the night before at the memorial brought us over to the group and made sure everyone got a copy of the 9/11 Petition and our leaflet on Glass-Steagall and removing Obama. Several press outlets were there and singled out our organizers holding signs about Obama’s War on Yemen for interviews. We were able to speak with IRAQ-TV about the need to get Obama out, the operation against the American population in the form of this election, the US/UK role in using terrorism as a geopolitical tool, and the need for the US and the Middle East to look toward Asia for a future and join the New Silk Road perspective for the world.

The two main speakers at the event were an Iraqi Imam and Yemeni activist. Both issued fire breathing attacks on the Obama administration for supporting this war. The Iraqi Imam singled out the British role in this war in addition to Obama’s. The Yemeni activist made a dramatic shift from once apologetic, to directly attacking Obama’s position in the war and his disgusting hypocrisy that he could claim to be liberal and democratic while allying with the barbaric Saudis whom he equated with ISIS.

Several people approached our organizers after seeing the 9/11 Petition and hearing us give interviews. About a dozen people signed the petition at the event, and 4 more signed on the website. There was a lot of interest in what LaRouche is proposing as an economic solution. Four people from the weekend’s events came out to our emergency meeting on the mobilization to implement Hamilton’s economic principles in the form of LaRouche’s Four Laws. This was a real breakthrough. Despite the work we have done in the past within the Arab community, we have not had this kind of rapid activation and attendance at our meetings.