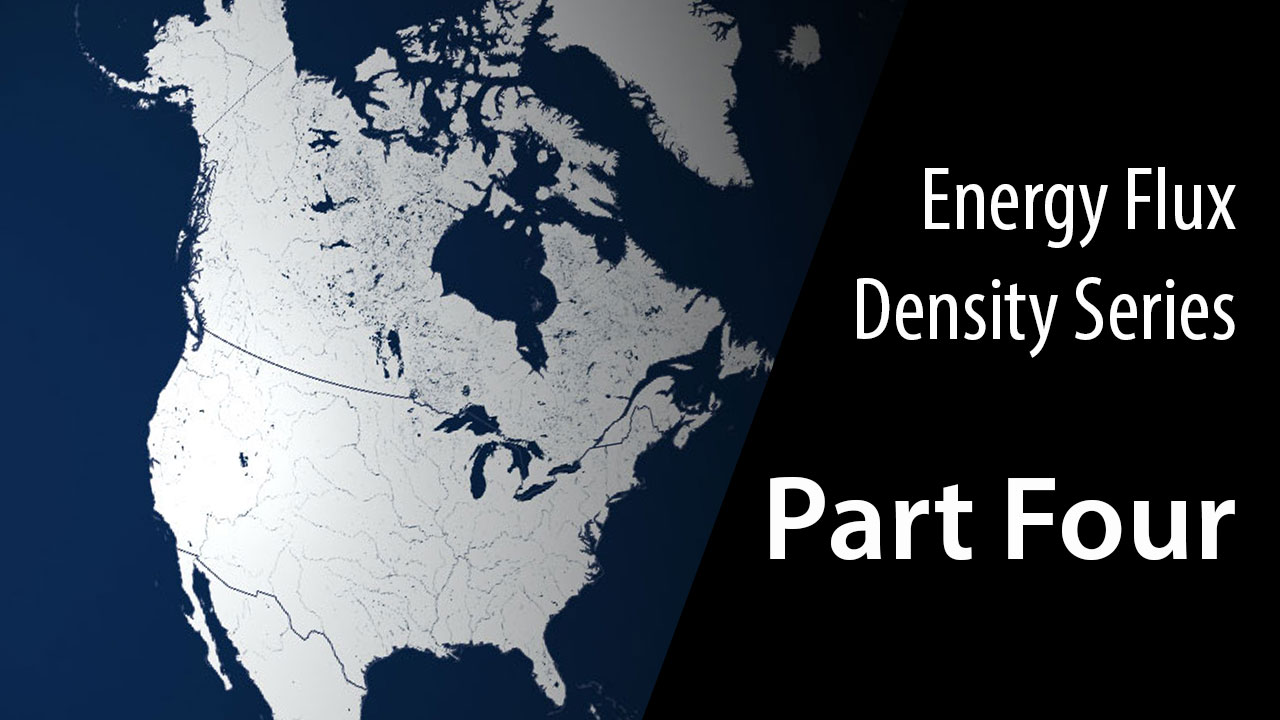 Reversing the Devastation of Globalization

For many in the older generations, Lyndon LaRouche might be most respected for his role in designing and promoting what became the Strategic Defense Initiative (SDI) program. However, most people do not fully appreciate the depth and implications of LaRouche’s SDI program.¹ As much as it was a military defense policy, designed to temporarily eliminate the threat of thermonuclear warfare, it was also designed to ensure the kind of global economic development, for both formerly colonized and industrialized/post-industrial countries, which could create the basis for a durable peace on the planet.²

LaRouche’s SDI was to be, first and foremost, a science- and technology-driver program, which would develop new defense capabilities and generate vast economic benefits for directly participating countries, through the rapid development and implementation of new arrays of advanced technologies throughout the economies (beyond the defense sector). Countries such as the United States and, at the time, the Soviet Union, would also gear their economies toward advanced, high-technology capital goods exports for the formerly colonized and so-called developing countries around the world, ensuring that all of these countries would have the basis to undertake the kind of economic development actually achieved in the cases of South Korea and China discussed in part three.

Under LaRouche’s 1980s program, the United States had a key role to play, requiring a massive gear up and development of the economy’s productive capacity. Today, the situation is not fundamentally different. Rather than working with the Soviet Union on this global development perspective, today the United States should be looking to China, in addition to Russia and other leading nations.

Despite the economic decline our nation has suffered since the 1980s, we still have a unique and indispensable role to play. As LaRouche discussed in his 1983 program for the development of the Indian–Pacific Oceans Basin, the United States must bring to bear its unique and positive access to the “cultural resources of Western civilization.”

From this standpoint, here we look at the energy flux density of the U.S. economy, historically (what happened), tragically (what could have happened but did not), and potentially—with what we can do, starting today, and into the future.

The Perspective from the JFK Administration

A useful reference point for assessing the successes, failures, and potential of the national economic energy flux density of the U.S. economy is the 1962 nuclear power report written for President John F. Kennedy at his request, “Civilian Nuclear Power—A Report to the President.”  Produced by the U.S. Atomic Energy Commission under the direction of nuclear scientist Glenn Seaborg, the report forecast coming energy needs for the United States, with an emphasis on the role nuclear power should play. 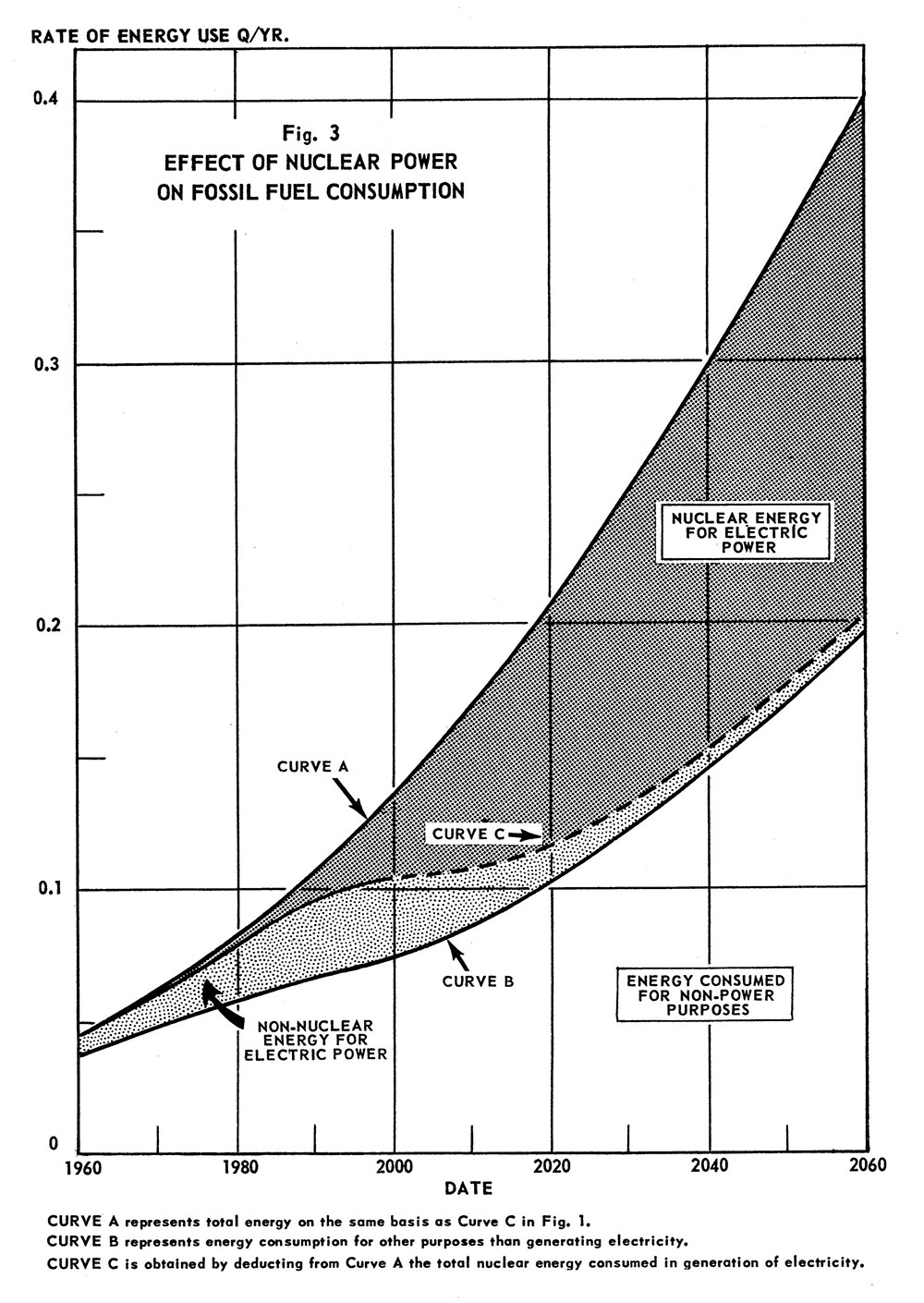 Taking their forecast for total energy requirements, and expressing it as energy consumption per capita (accounting for the greater U.S. population growth expected at that time), we can compare what has happened with their forecasted requirements. As can be seen in the chart below, actual energy consumption per capita has essentially flat-lined since the early 1970s, and is far below what the Seaborg report had forecast.

As discussed shortly, the largest factor in this discrepancy is the collapse of energy consumption within the U.S. industrial sector. The following graph includes a projection of per-capita primary energy consumption if U.S. industry maintained the same rate of growth as other sectors of the economy, identified as “USA industrial non-decline” and described in more detail below. 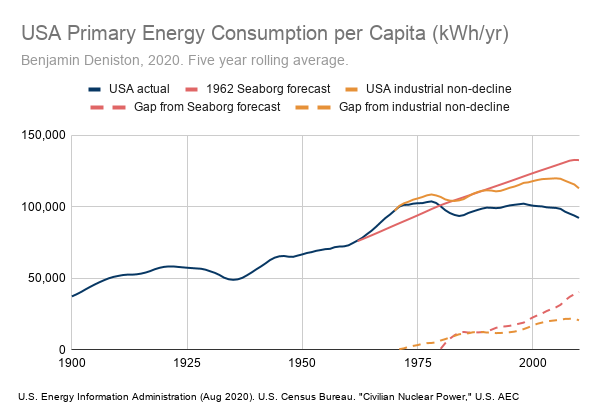 The energy consumption per capita in 2010 was 30% below what was expected by the Seaborg assessment, and 20% lower than our simple assessment of industrial non-decline.

This discrepancy between the actual energy flux density of the U.S. economy and the projected requirements under a non-globalization system are significant, but fall short of what is needed for the U.S.A. today to overcome the attritional loss built up over the past 40 years, adequately rebuild, and play a positive role in global economic development by creating a large capacity for high-technology capital goods export.

Collapse of the Industrial Sector

With data from the U.S. Energy Information Agency, we can examine the energy and electricity consumption within four main sectors of the U.S. economy since 1950: commercial, residential, transportation, and industrial.

The overall stagnation in national economic energy flux density since the early 1970s is primarily due to a major collapse in the industrial sector. This clearly expresses the failures of the globalized system, within which the USA shifted to a supposedly post-industrial mode, relying on overseas cheap labor production, rather than high-technology and capital- and energy-flux-density-intensive domestic production.

As elucidated in the graph below, energy consumption per capita for all four sectors grew in the 1950s and 1960s, but in the 1970s industry was the only sector to stagnate and then collapse. Following the phase shift of the 2007-2008 economic crisis, all sectors began to either stagnate or decline. For an overly-simplistic estimation of what the industrial sector could have looked like, we can take the average of the annual rates of change for the three other sectors, and apply that to the industrial sector (starting in 1971), generating the short dashed line, “industrial sector under non-decline.” This is simply showing what energy consumption per capita in the industrial sector would have been if it continued the same growth rate as the other sectors, not necessarily what it needed to be for the implementation of LaRouche’s program. 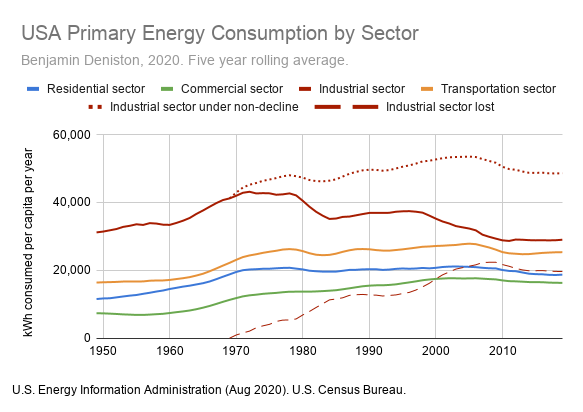 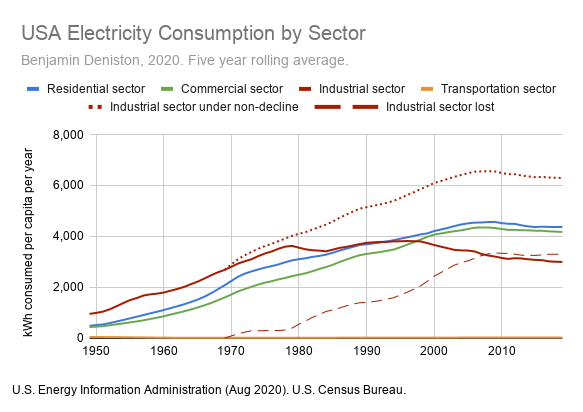 The Critical Role of Nuclear Power

Additional insights can be gained by dividing the energy consumption per capita between the various sources of that energy. In the history of the United States, we see a clear succession of waves of new energy sources representing higher and higher energy densities, illustrating the type of progress LaRouche outlined in his 1980 book, “Basic Economics for Conservative Democrats” (as discussed in part two of this series).

“In general, the potential productivity of an economy is limited on the higher side by the energy-density of the basic modes of energy production being used by that economy. The higher the energy-density, the cheaper the energy can be in terms of social costs of producing energy, and the more abundant the energy available for expanding the economy.” 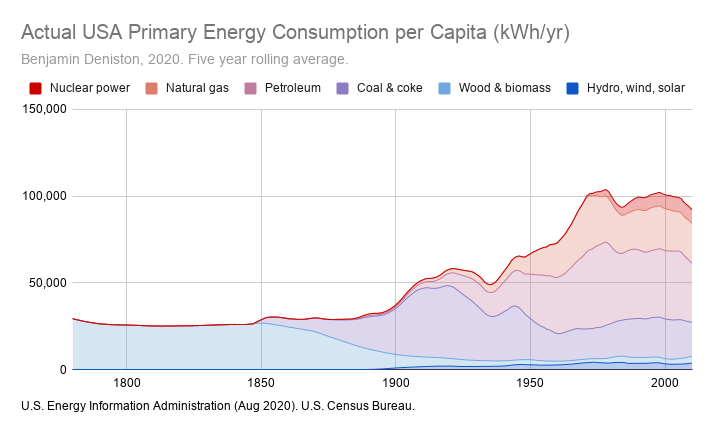 Unfortunately, the next phase, nuclear fission power—at an astounding 1,000,000 kilowatt-hours per kilogram—stagnated and failed to reach its potential, as the U.S.A. instead went with green, post-industrial, and globalization policies. Following fission, the next great frontier—fusion power—has yet to receive the support needed to get off the ground.

The expected potentials of nuclear fission power were clearly expressed in the 1962 Seaborg report. To illustrate this, we can replace actual nuclear power consumption per capita with what was expected by the Seaborg report, showing a nearly perfect continuation of the succession of waves, each expressing successively higher energy densities of their respective fuel sources, as LaRouche identified.⁵ 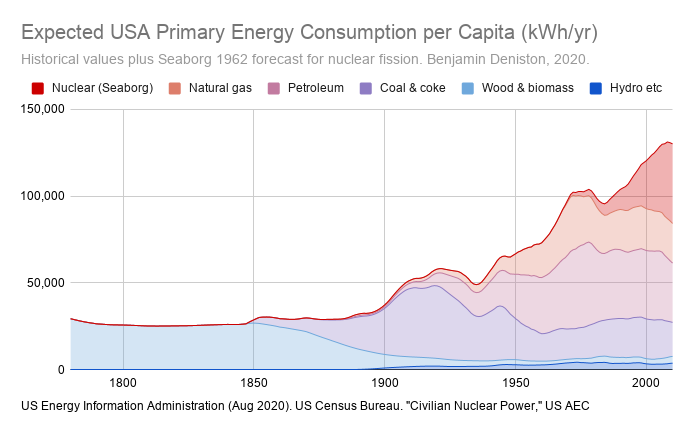 This projection from the 1962 Seaborg report represents what would have been a healthy U.S. economy from the 1970s through 2010, one capable of sustaining the necessary levels of domestic infrastructure and industrial development required for domestic growth and a capital goods export policy internationally.

Since this was not achieved, where do we go from here? We can generate an assessment of the energy-flux-density growth needed within the U.S. economy over the next generation. We take a level of nuclear fission power development similar to the Seaborg forecast, and include the impact of a crash program for nuclear fusion power, with initial demonstration reactors coming online in 15 to 20 years, followed by the development of second-generation commercialized reactors for mass implementation in 25 to 30 years. Coal, petroleum, and natural gas are all assumed to experience moderate declines, similar to the forecast from the Seaborg report, while hydroelectric is assumed to show a slight increase, corresponding to further development of hydroelectric potential with programs such as the North American Water and Power Alliance (NAWAPA). Wind and solar are rapidly phased out. 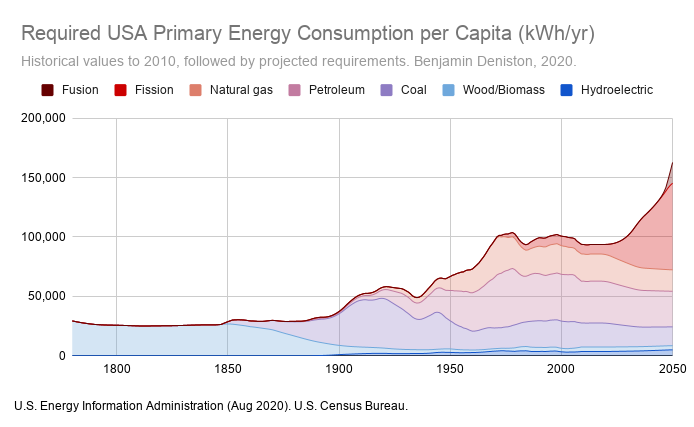 This is what is required for an actual recovery of the U.S. economy from the disastrous last two generations of radical environmentalism, globalization, and post-industrial policies. Because the majority of the growth will come from nuclear fission power, we can estimate the number of nuclear power plants in the U.S. will need to increase tenfold by 2050, from 100 to 1,100 (each providing one gigawatt of electric power).

If the United States is to fulfill its obligation to its population and posterity, and its role in leading the kind of anti-imperialist global economic development reflecting and elaborating the positive principles central to the founding of this country, this type of energy-flux-density development of the U.S. economy is absolutely necessary.

1. LaRouche initially promoted this policy under the name “beam defense,” years before it came to be known as the SDI. Although President Reagan’s initial adoption of the policy (March 1983) showed immense promise, the implementation of the SDI fell short of what LaRouche had designed and promoted. [return to top]

3. The historical energy use values are from the U.S. Energy Information Agency’s “Annual Energy Review 2011,” “Table E1. Estimated Primary Energy Consumption in the United States, Selected Years, 1635-1945.” This does not include the use of animal power, or harvesting water or wind power for mechanical purposes.  [return to top]

4. Hydroelectric power provides a small, but noticeable contribution to the total, and has been grouped with wind, solar, and other sources for simplicity.  [return to top]

5. A more detailed examination of the Seaborg report’s forecast for changes in coal and other fossil fuel usage is available in the two part series, “Physical Economic Case Study: Costs of the Failure to Go Nuclear”. However, the overall results are not dramatically different from what we have here.  [return to top]