There is no such thing as an infinitely sustainable steady state for an economic process. To exist an economy must continually generate and implement scientific and technological progress. Without this progress an economy will become entropic, drawing down resource supplies and requiring an increasing physical cost to society to produce and provide the capital goods needed by society. Perhaps one of the clearest examples is the failure of the US economy to fully embrace the revolutionary transition to nuclear power.

Here is part one of a brief, two-part investigation.  [Edit - Part two is available here]

In the report – entitled, “Civilian Nuclear Power: A Report to the President • 1962” – Seaborg provided the assessment that nuclear fission power could be rapidly expanded over the coming decades to become the dominant source of electrical power for the nation (overtaking all other sources of electricity shortly after the turn of the century).

Comparing the assessment of Seaborg's nuclear power driver program with what has happened under the increasing dominance of an anti-nuclear, zero-growth, green paradigm, we see that today we have a significantly lower level of energy use than what was to be expected under a nuclear driver program, in both absolute and per capita terms. Understood in terms of Lyndon LaRouche's science of physical economy, this is a lower national economic energy flux-density (measured in terms of power per capita; see https://larouchepac.com/energy-flux-density).

We also see that we're deeply into an attritional process due to this failure to develop nuclear, with current levels of coal use (in absolute and per capita terms) presently significantly higher than they would have been under the nuclear driver program proposed to Kennedy by Seaborg. I.e., the anti-nuclear, zero-growth policy of the green movement has led to an increase in coal use, and the green's much-hyped wind and solar hasn't come close to even matching this increase in coal use.

[As a side note, I am not inherently opposed to the use of coal, but in the current, nuclear era it represents an antiquated, lower-order power source.]

This is a fully lawful expression of certain principles of LaRouche's science of physical economy – the need for continual growth, and, most emphatically, growth in the qualitative (rather than merely quantitative) progress associated with increasing levels of energy flux-density (my colleague Jason Ross has produced an excellent presentation of this in his video, "Forging Fusion: Physical, Chemical, Nuclear, Fusion!"). As we're now experiencing, without increasing energy flux-density, a zero-growth economy doesn't simply stagnate, it shifts into an entropic process of attritional rundown (a degenerative processes that is actually accelerated by increasing use of “green” sources of power – wind, solar, biofuels, etc.).

Last year my colleague Liona Fan Chiang examined the case of hydrolic fracturing used to release oil and gas deposits – fracking – as an example of this type of physical economic attrition (see, "Fracking: Economics of Extinction"). Here we will examine another example.

Figure 1: USA Electricity from Coal Under Pro-Growth vs Zero-Growth Policies

Although year to year numerical data is not available in Seaborg's 1962 report to Kennedy we can work from their charts to compare where they forecast the US energy and electrical consumption would have been under an expansion of nuclear power with where it is today (under nearly two generations of the zero-growth paradigm). 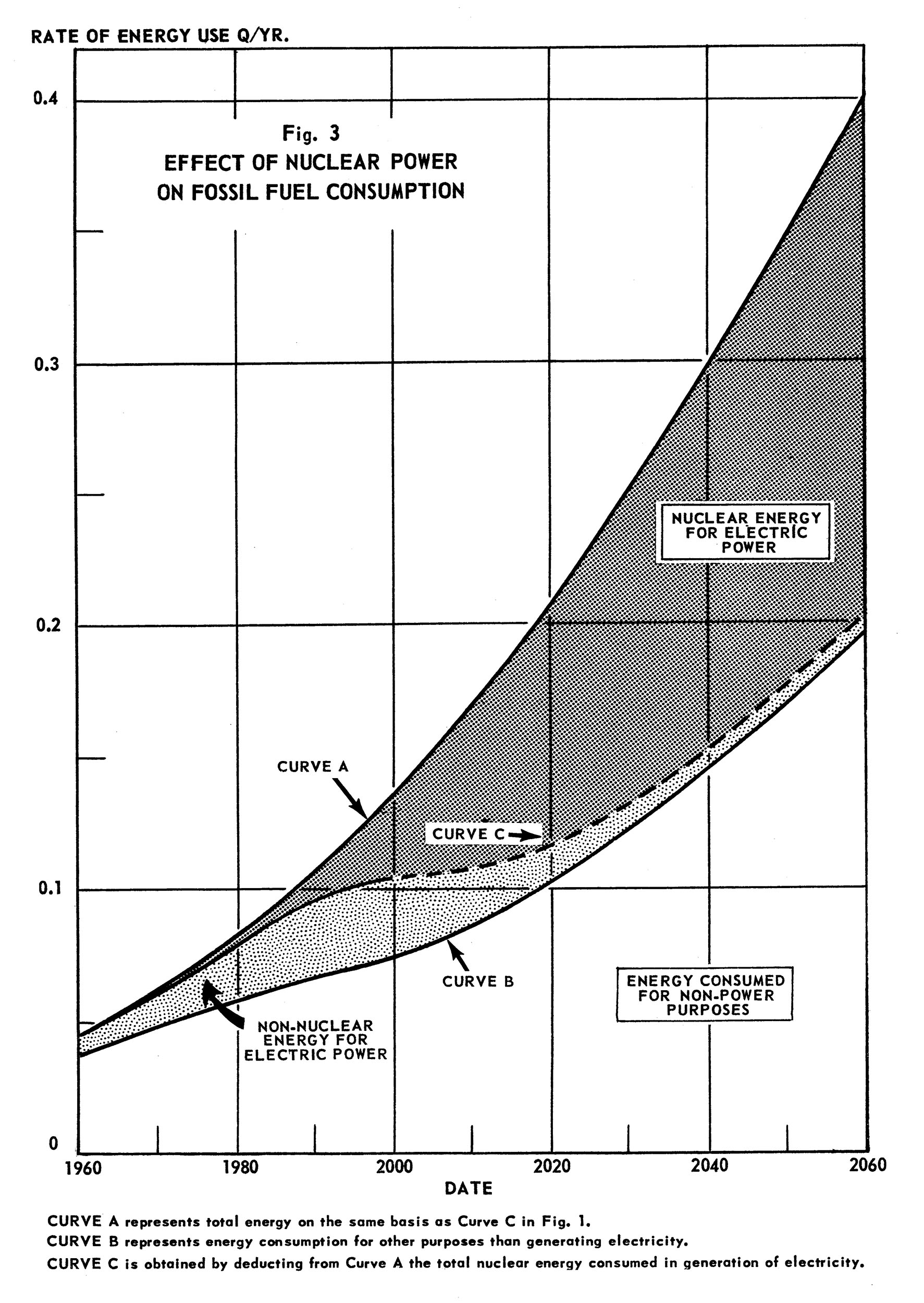 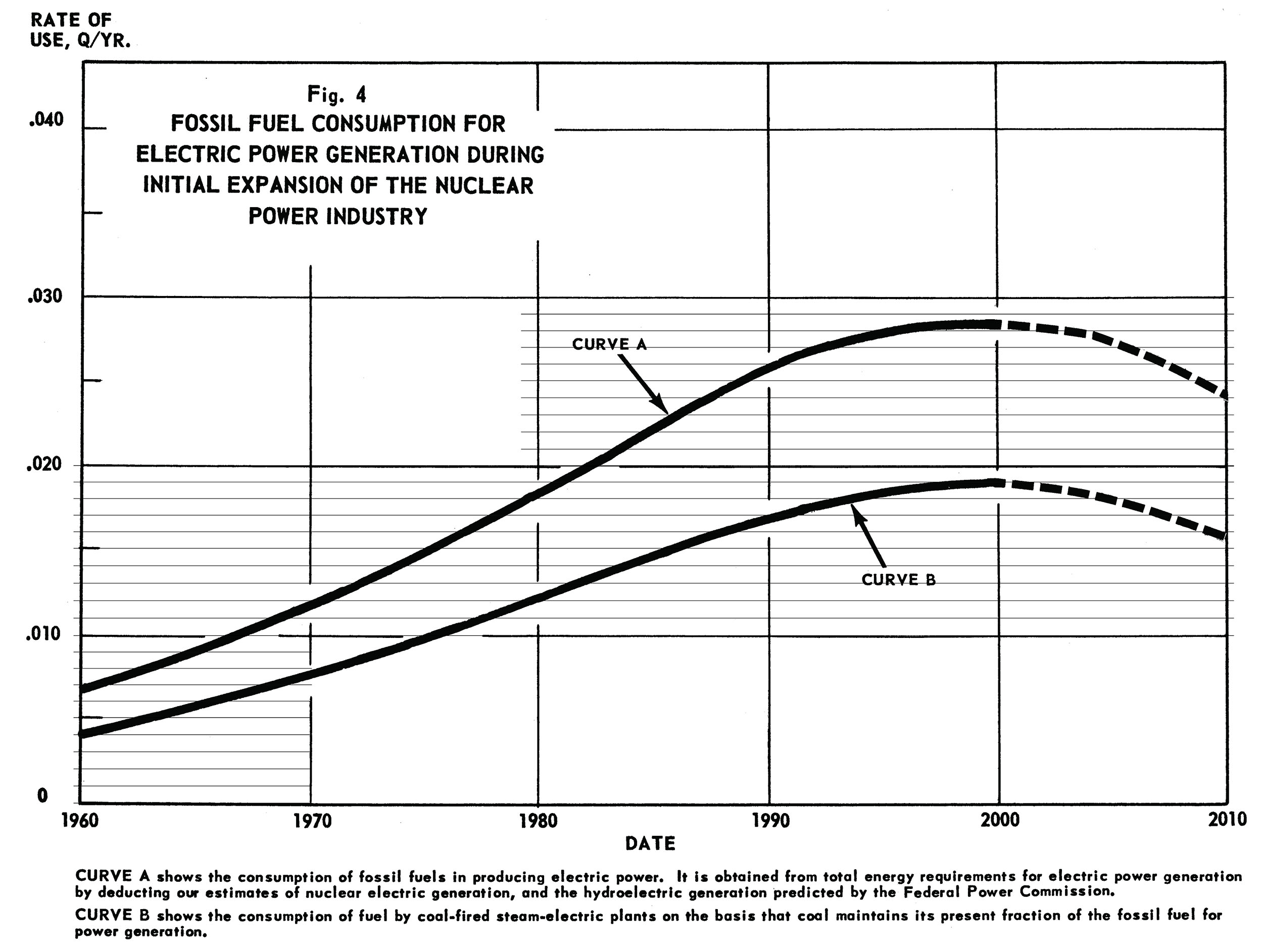 By examining these two charts, I produced the following table of their assessment of the levels of various forms of energy consumption (non-electrical, electrical, coal for electrical, nuclear for electrical, etc.) at the end of each decade from 1960 to 2010 (again, measured in quintillion BTUs per year).

Using information from the US Energy Information Administration we can see what the energy consumption has been for all these same categories. The United States clearly hasn't followed a program like that proposed by Seaborg. While nuclear power did expand throughout the 1960s and into the 1970s, by the late 1960s and early 1970s the momentum began to shift to a policy of anti-nuclear power. Scares of overpopulation, nuclear radiation, pollution, etc. fueled a dramatic political-economic-cultural shift, away from the pro-growth and development policies of president Franklin Roosevelt, John F. Kennedy, and California Governor Pat Brown, and into a zero-growth paradigm.

We can now compare the history of what has happened under 40 years of zero-growth policy with what could have occurred under the nuclear driver program Seaborg proposal to Kennedy. This comparison will be made in absolute values (measured in quadrillion BTUs per year) and in per capita values (measured in watts per capita).

[As a side note, it should be emphasized that the per capita values are not simply an individual's direct use, but all the energy requirements to run the entire economy (agriculture, industry, transportation, water management, etc.), measured on a per capita basis.]

[As a side note, it is worth recognizing that this expansion of electrical capacity could have supported a shift to an entire new mode of industrial production utilizing advanced laser systems, high temperature plasmas, and other forms of directed energy technologies – requiring electrical power rather than the relatively inefficient heat of coal and coke combustion. This was presented in some detail in the June 1983 EIR report, “The Economic Impact of Relativistic Beam Technology,” where it was made clear that the main bottleneck in being able to implement such a new industrial revolution was the level of electricity production.]

Under Seaborg's growth scenario by 2010 the total coal used for electricity would be in decline, and, even with the much higher total energy and electricity consumption levels, coal would be significantly less than what it is today – 15.6 quadrillion BTUs per year instead of the actual 2010 value of 19. As discussed below, this decline in coal use for electricity generation would have been a natural consequence of a growth program, consistent with the history of prior transitions to new energy sources.

If we examine this in per capita terms we see the same characteristics, though with slightly different values because the Seaborg report was premised on a higher rate of population growth – reaching 320 million by 2000 (whereas the actual US population was only 282 million by 2000).

As with the absolute measurements, by 2010 the nuclear driver program would have brought a decline in the per capita electricity provided by coal (1,460 watts per capita), 30% lower than the 2010 values resulting from a zero-growth policy (2,076).

Comparing Seaborg's AEC scenario with today's reality indicates that we're using a greater amount of coal – in absolute and in per capita terms – for a lower overall level of national economic energy flux-density. It is also important to emphasize the total amount of electricity provided by the combination of wind, solar, geothermal, and biomass is significantly less than the increase in coal use attributable to not going with the Seaborg nuclear program. In absolute terms these “renewable” sources only provided the equivalent of 1.3 quadrillion BTUs per year, whereas the increase in coal use attributed to the zero-growth program is 3.65; and in per capita terms, these renewables provide 141 watts per capita, while the increase in coal use is over four times higher, at 616.

Forty years of an anti-nuclear, zero-growth, green paradigm (measured against the nuclear program of Kennedy's pro-growth paradigm) has led to a lower level of energy consumption and a higher rate of coal consumption – in absolute and per capita terms – with green energy not even coming close to matching the increase in coal use.

In part two we will examine this in the larger context of the changing energy flux-density throughout the hsitory of the United States.

USA Electricity from Coal Under Pro-Growth vs Zero-Growth Policies