LaRouchePAC recently initiated a “Defeat Green Fascism” campaign in response to the renewed push for a scare campaign around hypothetical catastrophic global warming caused by man’s activities.  Executive Intelligence Review will soon release a publication exposing the fraudulent premises of this, which have their roots in an intentional depopulation agenda.

Ironically, others are warning of another possibility--in fact, the opposite--that being the threat of a major global cooling in the coming decades, mainly attributed to solar changes.  While it can’t be said for certain that this will occur, or what its exact magnitude would be, the possibility is very real, and the consequences very serious.

In a white paper entitled “Food Security and Climate” certified consultant meteorologist Joseph D’Aleo, first Director of Meteorology for the Weather Channel, warns of the real threat of a deep solar minima and global cooling which is by nature the more destructive climate change to agriculture.

There has been increased coverage in recent weeks of the potential of a new mini-Ice age after wide circulation of a new study of solar activity and solar cycles presented by Professor Valentina Zharkova at a the National Astronomical Meeting in Wales.  Zharkova has acknowledged that global cooling could be an effect of two cycles of solar magnetic activity which will be completely out of sync in the near future, one is located closer to the surface, and the other deep within its convection zone-- both have a roughly 11-year period, and are involved in producing the well-known 11-year solar cycle, of increasing and decreasing sunspots.  Zharkova’s analysis appears to give a more accurate and nuanced picture of longer term variations in these cycles, and why we can expect a coming period of solar weakening.

This is just the latest in an ongoing series of studies pointing in this direction.  Other studies of changing activity on and in the Sun have also highlighted the strong possibility of a significant decline in solar activity in the decades to come, and the Russian astronomer Habibullo Abdussamatov has been warning of a coming reduction in solar activity and resulting global cooling (as discussed here).

D’Aleo also suggests that solar activity is the driving factor in climate change, and that this can be amplified by other factors--not CO2, but multi-decadal ocean cycles and also periods of increased volcanism, known to have a delayed cooling effect on the planet.

What is particularly important about this 2014 study is the focus on the potential impacts on agriculture.

D’Aleo ironically points out that even the most dire warnings of a 3 degree C warming in coming decades would not necessarily be problematic for most agriculture.  He points out that crops such as corn are grown in regions whose temperatures already span more than a 5 degree interval.  He also emphasizes a point which has not been lost of many critics of the man-made climate change crisis scare, that increased CO2 levels are in fact beneficial for plant life.  Plant growth above the 40 degree latitude line has continued to increase since the early 1980’s, possibly for this reason (as renowned physicist Freeman Dyson has stated recently).  Expanded growing seasons and regions would be the main effect of any warming (which D’Aleo does not think will occur).

On the contrary, cooling could have significant effects on agriculture in countries like Canada, where a shift of the growing areas south could all but completely eliminate farming.  D’Aleo discusses the prospects for agriculture given a 2 degree C cooling, which would change growing seasons by about 2 weeks. 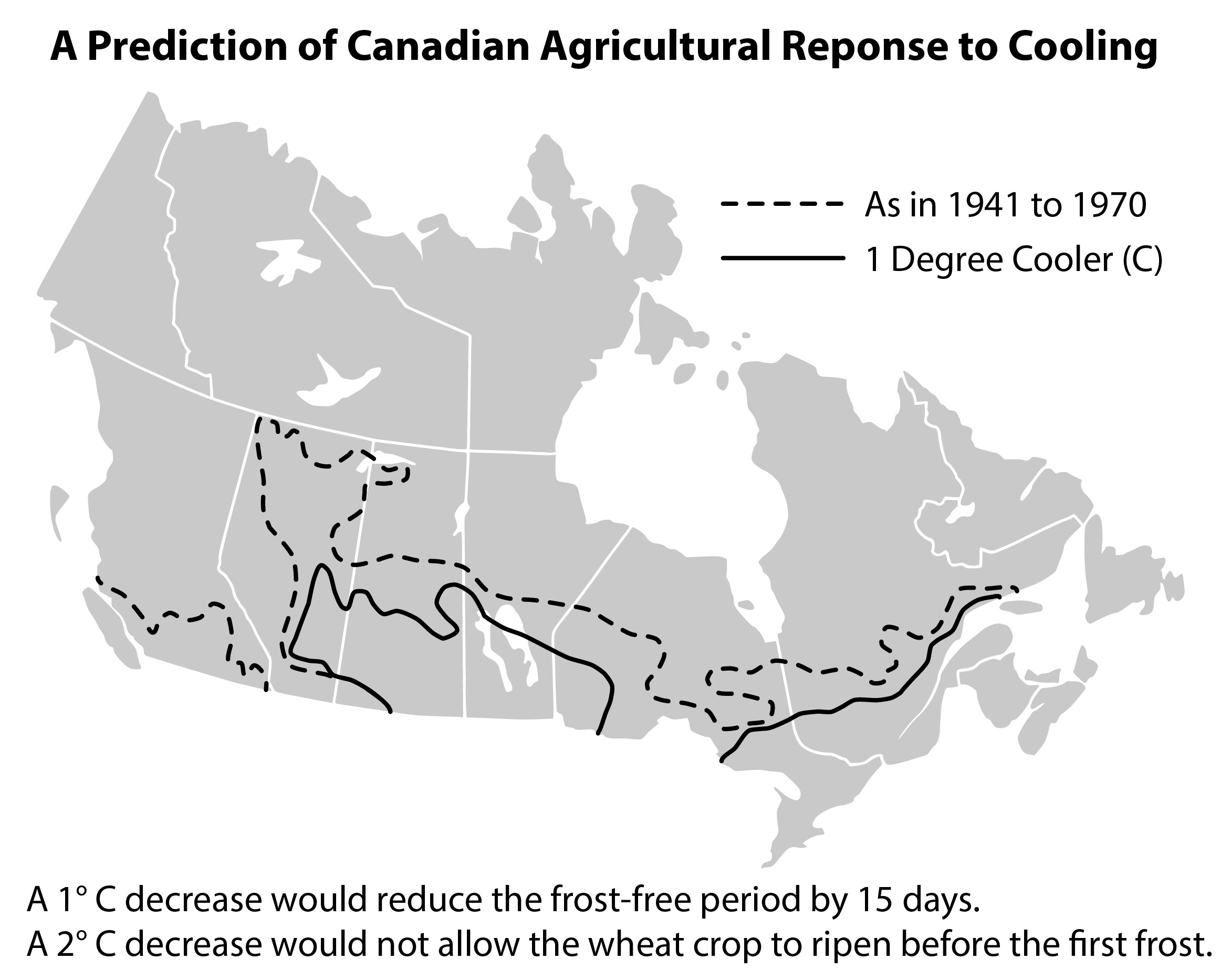 Shorter growing seasons could have significantly negative effects requiring expensive crisis management: the need for short-season hybrids, probable forced replanting, and even needing to use large fans or helicopters to mix air, a technique which is sometimes used for high-value crops like wine grapes and citrus fruits, but hardly affordable for the average grain farmer.

Productivity of the US Corn Belt falls by 10% for every 1 degree C cooling in annual average temperature.  The growing region is also required to move south by 144 km to compensate for this amount of cooling, and soil quality declines to the south of the Belt.

D’Aleo also cites a 2013 study which shows the association with deep solar minima, cooler climates, and megadroughts.  He writes, “in effect, a megadrought for North America is predicted from at least 2050-2200.”

Crops such as coffee, cocoa, and citrus are especially sensitive to this kind of climate shift.  Freezes in the southern US and Brazil  in the 1980’s and 1990’s showed this.  D’Aleo notes “in both cases, the freezes occurred at solar minima but were augmented by major volcanism a few years earlier.” These same areas will become vulnerable in a new deep minimum.  D’Aleo provides a graphic illustrating the inverse relationship between coffee prices and sunspot numbers from 1985 to the present (this is reminiscent of William Herschel’s famous 18th century correlation between sunspot activity and wheat prices). 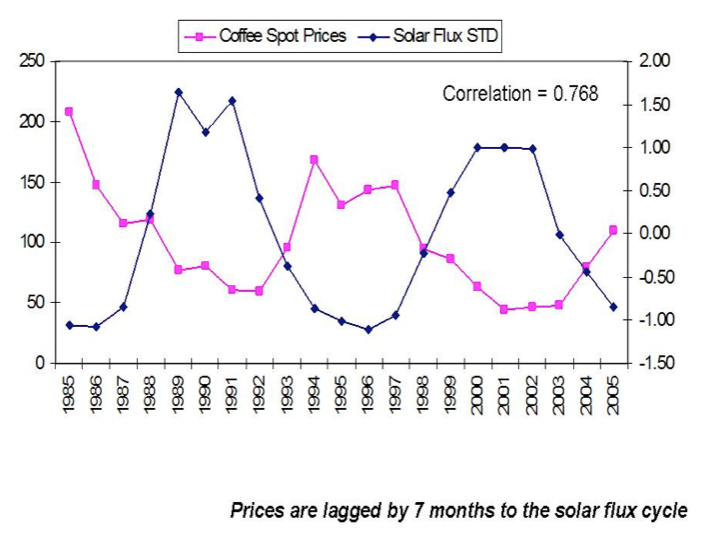 He concludes: “The current situation is most similar to the 1950’s, when multi-year droughts occurred in the Plains.  Given that the two ocean cycles will soon both be in the negative phases and the Sun may be going into a deep slumber (similar to the Dalton Minimum in the early 1800’s), it suggests that instead of warming and a shift north of the main grain belts, a shift south with shorter growing seasons cannot be dismissed and should be given serious considerations in medium to long-term planning.  This could impact the grains and soft commodities like citrus and coffee.”

Here is a link to the paper: